Sharks… just the word may evoke fear in some. The reality is that one is more likely to be hit by lightning than be attacked by a shark.

There are over 500 species of sharks that play important roles in the balance needed for healthy oceans. Some sharks are at the top of the ocean food web keeping marine populations healthy. Other sharks keep the ocean clean by eating animal remains (detritus).

You may find shark teeth at the beach. Sharks loose up to 30,000 teeth over their lifetime and replace them very quickly.

Learn more about sharks and rays by reading some great books today. Look for these and other shark books at your library or online at www.arbordalepublishing.com.

And when you are finished reading, here are some great activities from members of the Association of Zoos and Aquariums to help young children learn more.

Thousands of people flock to the beaches for summer vacation, and it is a thrill to spot a shark or a dolphin from the sand. It can be tricky to determine which is which but here are a few similarities, differences, and fun facts about these sea creatures.

When a fin rises above the waves, note the angle.

A dolphin has a curved dorsal fin and a horizontal tail. They propel themselves up and down through the water taking in oxygen as they crest waves before disappearing below the water’s surface.

Sharks have a more triangular dorsal fin. Their tails are vertical, and it moves from side to side smoothly propelling the shark through the water. 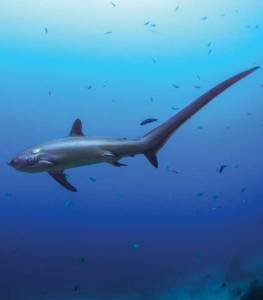 Since a shark is a fish they breathe under the water, but beware if a shark launches itself into the air, dinner is likely in its sights. Great White sharks have been caught on video chasing seals and other fast movers high into the air, although this is not a common sight to see from the beach.

A small number of bottlenose dolphins chase their food above water in a coordinated event called strand feeding. At low tide, a group of dolphins circles a school of fish until they propel themselves onto the beach and feed on the delicious fish and shrimp. Visitors to the South Carolina or Georgia coast may be lucky enough to see this event, but dolphins are very smart creatures and don’t often strand feed while people are around.

Here are a few books where you can learn more about sharks and dolphins!

Sharks and Dolphins:  A Compare and Contrast Book

Sharks and dolphins both have torpedo-shaped bodies with fins on their backs. They slice through the water to grab their prey with sharp teeth. But despite their similarities, sharks and dolphins belong to different animal classes: one is a fish and gets oxygen from the water and the other is a mammal and gets oxygen from the air. Marine educator Kevin Kurtz guides early readers to compare and contrast these ocean predators through stunning photographs and simple, nonfiction text.

If a Dolphin Were a Fish 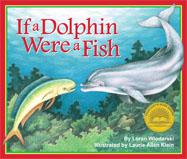 Join Delfina the dolphin as she imagines that she becomes other sea animals: a fish, a sea turtle, a pelican, an octopus, a shark, even a manatee! The incredible morphing illustrations will have children laughing as they learn about the real differences between these ocean animals and their respective classes.

“Who am I?” wonders Shark Baby. When his “mermaid’s purse” egg case is torn loose in a storm, he finds himself on a journey through different ocean habitats: kelp forests, coral reefs, and seagrass meadows. He learns what kind of shark he isn’t, but not what kind he is. He needs to find the “mermaid” to learn where he belongs, but the ocean is big and full of dangers. Will he find out who he is—and what he can do—in time?

Nature has a way of being cruel and being kind, here are a few fun facts where you can decide, if it is a trick or treat!

-Bats are the only mammals that can fly 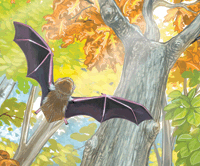 -A flamingo can only eat when its head is upside down.

-If a kangaroo’s tail is lifted off the ground it is unable to hop. They use their tail for balance.

-A baby shark is ready to go fast when it is born, so that the mother shark doesn’t eat it. 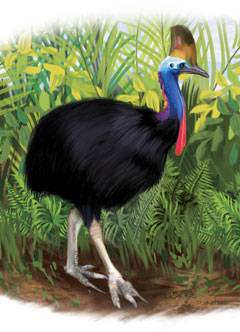 -The cassowary is a beautiful bird and is predominately a vegetarian, but it can tear holes in flesh like Swiss cheese.

-The orca has no natural predator in the sea and they hunt in groups just like wolves do on land.

-Rhinos amble through the African Savanna and thickets of dense plants filled with ticks that attach to the rhinos and make them itch! The tick bird rides along while eating the tasty treat!

-The vampire squid is a creepy ocean creature that squirts glowing goo from its arms.

Find these facts and many more in Arbordale’s For Creative Minds sections! Take a look while you are eating your trick or treat loot!

There are challenges to living far beneath the ocean’s waves and researchers are looking into the glowing eyes of sharks that call this dark part of the ocean home. The smalleye pygmy shark, viper shark, velvet belly lantern shark, splendid lanternshark, and blackbelly lanternshark all call the twilight zone home and swim about 200-1,000 meters below the sea. With very little natural sunlight the animals at this depth rely on bioluminescence to help them survive.

Because humans are not adapted to travel to these depths easily, researchers are continually finding new ways in which the creatures in the twilight zone use bioluminescence. A recent study by Dr. Julien Claes of the Université Catholique de Louvain in Belgium has discovered differences in the structure of the eyes of these five sharks that help them adapt.

In the lantern shark, researchers found that the area in the upper eye orbit contained a translucent area. They believe this adaptation uses bioluminescence for camouflage allowing the shark to use counter-illumination, or the ability to match the light of its background. This method of camouflage is used by other animals including squid.

Further showing that deep-sea shark eyes are different, the scientists found a gap between the lens and the iris allowing more light to the retina. The sharks studied also had a higher rod density in their eyes when compared with other shark species. This allows for better temporal resolution and aids the shark in communication. 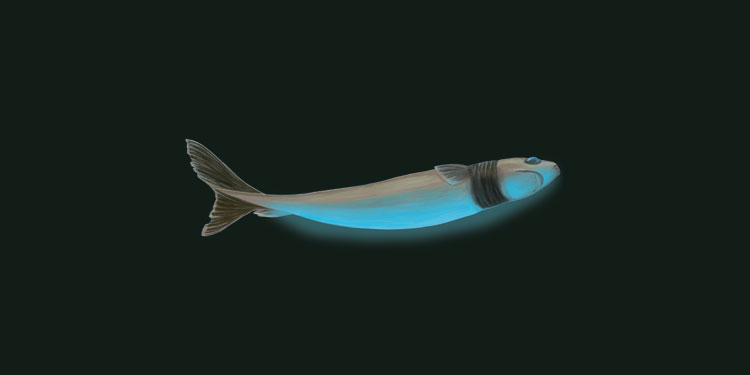 Much is unknown about life in the twilight zone, but researchers studying bioluminescence have found many special adaptations that animals have developed to live in this zone. “Every bioluminescent signal needs to reach a target photoreceptor to be ecologically efficient. Here, we clearly found evidence that the visual system of bioluminescent sharks has co-evolved with their light-producing capability, even though more work is needed to understand the full story,” said Dr. Claes.

Do you want to learn more about bioluminescent creatures read A Day in the Deep by Kevin Kurtz, illustrated by Erin Hunter?

Also coming this fall to Arbordale Animal Eyes by Mary Holland explores eyes and adaptations of animals on land and in the water.