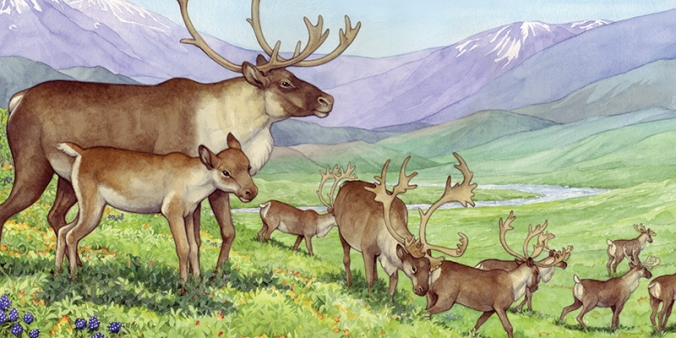 Sunshine and warm weather bring the end of school daze and summer vacation! Many families are eager to pack up and vacation somewhere new. Are you going on vacation? Animals are also On the Move this summer and here are a few places to visit if you want to catch the magic of migration.

If Alaska is on your travel list, the Arctic National Wildlife Refuge is a great place to stop in June or July to view thousands of caribou. They spend the summer months raising calves and soaking in the sun before heading south to avoid the freezing winter temperatures.

Turtle tracks are an amazing find during early morning walks on the Beaches of the Southeast. In June, July and August, mother loggerhead turtles travel to the shore to lay their eggs before heading back out to sea. Then the little hatchlings make the long trip down the beach before diving into the ocean. While visitors are unlikely to get a glimpse of a turtle during the day, there are signs all around.

Head to the shores of Manitoba, Canada to catch sight of the rare beluga whale. In July and August these smiling mammals make their way to the Hudson Bay to breed. Then catch the salmon run in the fall, but they begin streaming to British Columbia, Canada in late summer. Wade into the rivers in August and spot the red-sided fish swimming by in small streams.

Although the elephant seals on the central coast of California perform their mating rituals in the winter, you can catch them molting on the beaches during the early summer months. The San Simeon viewing area is a great location to watch the large pinnipeds lounging.

For more amazing animals that migrate throughout the year check out Scotti Cohn and Susan Detwiler’s book On the Move: Mass Migrations.