Peter Walters lives in Cornwall England, but has traveled all over the world as an educator. He has helped children write their own picture books, but this is the first published picture book of his own. Find out what inspired Peter’s book and his art…

What was your incentive to write this particular book?

I can quite vividly picture where the journey of this book began. I was sitting on sandy dunes in Otago, NZ watching two brave yellow-eyed penguins scamper past a snoozing fur seal to a rocky alcove. I felt then that the richness of the environment and web of predators and prey was so detailed; that I believed it could so effectively engage with a child’s curiosity.

How has teaching children all over the world influenced your writing?

I am fortunate that my work with children has exposed me to a variety of cultures and it has always been fascinating to observe the role of the child and the attitude towards childhood wherever I have been. While I have seen many differences between cultures I have also witnessed traits that appear universal and I am certain the relationship children have with storytelling is one such trait. One other direct influence on my writing for children is their interaction and interest in the natural world. We of course, as a species, have an intimate relationship with nature and while the modern world increasingly obstructs the time children have to cultivate this relationship, the deep-routed curiosity that an image of a lion, eagle or dolphin generates still remains.

Leave a comment and enter to win a copy of The Hungriest Mouth in the Sea! 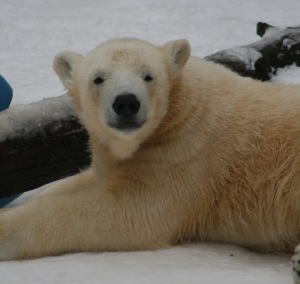 This snow white bear is a very important animal, not only are they incredibly cute, they are a fierce hunter, and very dependent on their environment for survival. Researchers keep a keen eye on the polar bear population as an indicator of our overall planet’s health.

Why is this? Polar bears are dependent on the sea ice to hunt seal (their favorite food), when that ice melts due to climate change they lose their hunting ground and without access to their main source of food the population suffers.

So today celebrate the polar bear and be conscious of how you treat the environment, because the actions we take affect the whole planet.

Do you want to learn more about polar bears and their chilly habitat? Here is a list of Arbordale books that feature polar bears!

Follow the rescue of orphaned polar bear Kali (pronounced Cully) from the Inupiat village of Kali (Point Lay in English) to the Alaska Zoo in Anchorage to his new home at the Buffalo Zoo in New York with Luna, a female polar bear. This photographic journey beautifully captures the remarkable development of the cub, who initially drinks from a baby bottle, sucks his paw for comfort, and sleeps with a “blankie” as he rapidly grows into the largest land carnivore on earth.

Polar Bears and Penguins: A Compare and Contrast Book

Polar bears and penguins may like cold weather but they live at opposite ends of the Earth. What do these animals have in common and how are they different? You might see them near each other at a zoo but they would never be found in the same habitats in the wild. Compare and contrast these polar animals through stunning photographs

An arctic adaptation of “This is the House that Jack Built” follows polar bears, walruses, seals, narwhals and beluga whales as they chase each other around “the ice that floats in the Arctic waters.” Not only is the rhythmic, cumulative prose good for early readers; it is a pure delight to read aloud. The “For Creative Minds” section helps children learn how these animals live in the cold, icy arctic region.

When Sophia dreams that howling winds whisk the fur and feathers right off her animal friends, she shares some of her clothes with them. But her clothing doesn’t work well for the animals. Seeing their disappointment, she offers to sew each one the “right” coat. Animals line up to explain what they need and why. Polar Bear needs white fur to stay warm and hide in the snow. Fish needs scales, but with slime. Snake needs scales too, but dry ones. And how will Sophia make a prickly coat for Porcupine? The award-winning team of Halfmann and Klein (Little Skink’s Tail) reunite to bring animal coverings (and classification) to life in an imaginative way.

On the Move: Mass Migrations

Imagine seeing hundreds of the same type of animal gathered at the same place and at the same time! Right here in North America many animals gather in huge numbers and can be seen at predictable times and locations. Not all migrations are tied to seasonal food changes—some are tied to life cycles and the need to gather in huge numbers. Certain birds, reptiles, mammals, amphibians, fish, and even insects migrate during spring, summer, fall, or winter. Travel along with them as you learn about what puts these animals On the Move. key phrases for educators: life cycles, migrations, seasons, geography.