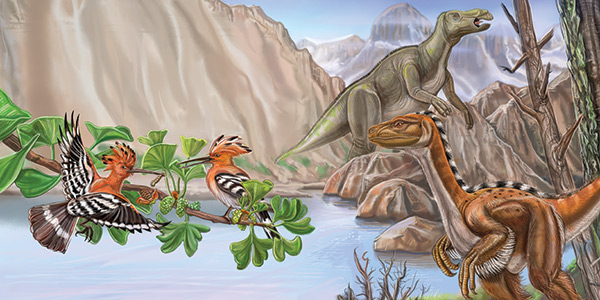 Recently, I was listening to a conversation about dinosaurs and the new Jurassic World movie. This made me think, what if we really could bring back a dinosaur? Is it really a good idea?

Biologists, paleontologists, and other types of scientists have made major advancements in studying fossils and extracting DNA information. For example, just a couple decades ago all dinosaurs were thought to be scaly green creatures. Now, we know that many of the dinosaurs had feathers and were very brightly colored.

Other advancements have been made in animal science. In 1996 Dolly the Sheep made news as the first sheep cloned from an adult cell. Other scientists have talked about the ability to reintroduce the woolly mammoth.

It would be amazing to think of a T-Rex stomping through the backyard. I don’t know if I want to see a beast the size of a bus coming toward me with those teeth especially after seeing the movies.

If your little ones want to learn more about dinosaurs, here is a short Arbordale reading list.

Just as some people dig and look for pirate treasure, some scientists dig and look for treasures, too. These treasures may not be gold or jewels but fossils. Following in the footsteps of Dino Tracks, this sequel takes young readers into the field with paleontologists as they uncover treasured clues left by dinosaurs. Readers will follow what and how scientists have learned about dinosaurs: what they ate; how they raised their young; how they slept, fought, or even if they ever got sick. True to fashion, the tale is told through a rhythmic, fun read-aloud that can even be sung to the tune of Itsy Bitsy Spider.

Step back in time and follow dinosaur tracks around the world. Whether made by a few dinosaurs or large groups, these tracks provide clues to the movement and behavior of these lovable ancient creatures. What dinosaurs made the tracks and what do scientists think they were doing when they made them? The author tells the story in rhythmic rhyme that may be sung to the tune of Over the River and Through the Woods.

Little Woolly leaves her mother behind as she chases a toad down to the river. When the glacial ice breaks, she is swept away in the rumbling, rolling water. Now alone, the mammoth calf struggles to survive. She must sneak past cave lions, bears, saber-toothed cats and humans. Exhausted and afraid, she must even hide from stormy weather as she fights her way back to her herd. How can she find them? Will she ever get back?