Would you blast off to Saturn, if you could? Well, a group of researchers virtually visited the ringed planets to recreate the formation of Jupiter’s moons. They simulated Jupiter’s path as it cleared a track around the sun and found that Saturn may have been close enough to disrupt material at the edges of the path forming some of Jupiter’s moons.

Friday the 4this National Space Day, and a day to celebrate the remarkable advancements in space exploration. From, trips to the moon, to finding the DNA of stars, researchers are learning more about our solar system every day.

So, let’s celebrate with a reading list! Check out these fun space books from Arbordale.

Saturn for My Birthday 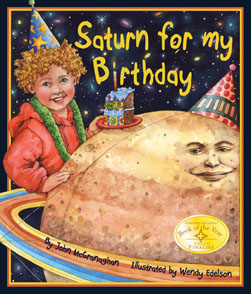 Jeffrey wants Saturn for his birthday, and he wants the moons too—all 47 of them. After all, they’ll make great night-lights! But he’s not selfish; he’ll share the rings with some of his friends at school and with his teacher, Mrs. Cassini. Facts about Saturn are woven seamlessly throughout this funny story as Jeffrey explains just what he’ll do with his present and how he’ll take care of it. His dad better hurry with the order, though, because shipping might take a while. The “For Creative Minds” education section features “Solar System” and “Saturn Fun Facts.” 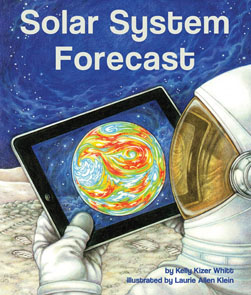 “Below-freezing temperatures, scorching heat, and storms bigger than planet Earth are just some of the wild weather you will encounter on your trip through the solar system! Get your fun facts along with your forecast for each major planet, as well as a moon (Titan) and a dwarf planet (Pluto). Get ready for some out of this world fun with Solar System Forecast!

Soar into the Solar System to witness the first Favorite Planet Competition, emceed by none other than the former-ninth planet, now known as dwarf planet Pluto. The readers become the judges after the sun can’t pick a favorite and the meteors leave for a shower. Who will the lucky winning planet be? Could it be speedy-messenger Mercury, light-on-his-feet Saturn, or smoking-hot Venus? Readers learn all about each planet as Pluto announces them with short, tongue-in-cheek facts. Children will spend hours searching the art for all the references to famous scientists and people of history, space technology, constellations, art, and classic literature.

Pieces of Another World 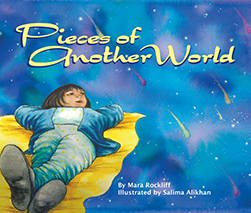 This touching story of a father and child’s nighttime excursion to watch a meteor shower is told through the eyes of a child in awe of the night world. Rockliff’s vivid descriptions make readers feel as though they too are watching the tiny bits of other, distant worlds blazing into our own.The “For Creative Minds” education section includes teaching trivia about meteors, meteor showers, comets, and asteroids as well as a “Meteor Math” game, a “Five Steps to a Fantastic Meteor Watching Party” checklist, and a recipe for comet cookies.

How the Moon Regained Her Shape 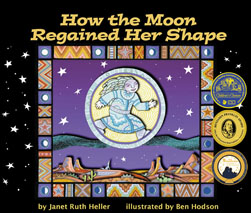 This fascinating story influenced by Native American folktales explains why the moon changes shape and helps children deal with bullies. After the sun insults and bullies her, the moon feels so badly hurt that she shrinks and leaves the sky. The moon turns to a comet and her many friends on earth to comfort her. Her friends include rabbits and Native Americans. Then she regains her full shape, happiness, and self-esteem. The moon also returns to her orbit. An educational appendix called “For Creative Minds” gives advice about bullying, scientific information about the moon, and ideas for related crafts, recipes, and games for children.

Get these books from www.arbordalepublishing.com in hardcopy or dual-language ebook along with teaching activities, quizzes and other fun activities for Space Day!