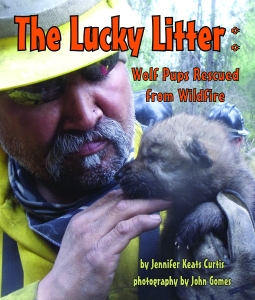 It’s no secret; at Arbordale we are big fans of Jennifer Keats Curtis and her ability to write wonderful books about animals. This season she pairs up with John Gomes again to bring us The Lucky Litter: Wolf Pups Rescued from Wildfire. John’s beautiful photographs really bring out the personality in these cute pups and paired with Jennifer’s insightful words, this book is already getting praise…

Have you ever wondered how Jennifer begins a book, She was kind enough to share her process of creating The Lucky Litter:

Last year, a huge wildfire in Alaska consumed vast amounts of wilderness, forcing people and animals to leave their homes. I learned about this devastating fire from my buddy John Gomes, the Alaskan photographer with whom I’ve worked on Animal Helpers: Zoos and Kali’s Story: An Orphaned Polar Bear Rescue. With John’s update came a tip –  the Alaska Zoo was expecting five wolf pups just rescued along the Funny River Horse Trail. John was looking forward to photographing the babies. Was there a story here?

I began gathering information about the pups and the rescue, tracking down the firefighters, wildlife biologists, vet, and keepers involved in helping these animals. I also connected with Alaska residents who had been affected by the fire. As it turned out, the adult wolves caring for those pups had been driven away by the heat of that massive fire. They were unable to return for the babies. Fortunately, a firefighter found one of the pups and rushed to get help. It is clear that Gannett, X-Ray, Huslia, Hooper, and Stebbins would not have survived without human intervention. There was indeed a story here. The Lucky Litter is the true story of the little pack’s survival.

This story almost wasn’t written. There was a question about whether wolves are a good topic for a children’s book. It turns out that people feel strongly about wolves and tend to fall into one of two camps: they love them or they hate them. Those who love wolves are awed by their power, beauty, and strength. Those who hate wolves believe these animals are frightening and view them as vicious, eating machines.

It is true that wolves are predators. But, they play a crucial role in the ecosystem. The gray wolf is a keystone species. A keystone is the big, important stone at the top of an arch that holds all of the other stones in place. The keystone anchors the structure so that it does not collapse. Keystone species are animals that help all of the other animals in an ecosystem stay in place. Gray wolves may be small in number but they play a big role from the top of the food chain all the way to the bottom. They help maintain the balance between predator and prey. When a keystone species is harmed, the entire ecosystem suffers. This important premise is beautifully shown in the video How Wolves Change Rivers (https://www.youtube.com/watch?v=ysa5OBhXz-Q) about the demise and reintroduction of wolves to Yellowstone Park.

I am thrilled that this story has come to fruition. My goal in writing for children is to help young readers see what I’ve seen and learn what I’ve learned. For this book, I discovered a lot about wolves and wildfires. I had the opportunity to work with people who are making a difference in the lives of animals. The photos capture the personality of each of the wolves. What’s not to love?

Learn more about Jennifer and John’s work on the book’s page, but don’t forget to enter to win a copy of your own by commenting on this post!