In 2012 author Terry Catsús Jennings introduced us to gopher that brought the landscape around Mount Saint Helens back to life after the eruption in her book Gopher to the Rescue. Sunday marks the anniversary of the eruption, but as we remember the event scientists are busy monitoring the rising levels of magma under the surface.

While the current reports show a rise in pressure scientists are not sounding the alarms jus t yet. Seth Moran a seismologist with the U.S. Geological Survey has closely monitored the volcano and found, “This is giving long-term (data) that it’s getting ready to erupt again, but it could be decades before it does something again.”

In 1980 Mount St. Helens also gave seismologists signs that it was about to erupt. As early as March 1st the volcano was showing building pressure and small earthquakes put the seismologists on notice that the landscape of the mountain was changing. Using laser equipment and also flying planes over 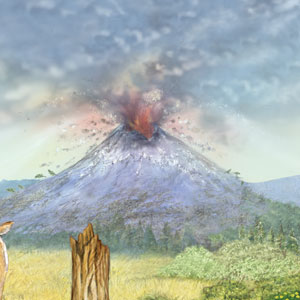 the mountain the scientists were able to gather the data that predicted when the mountain would erupt and this data save many lives.

The great intensity of the eruption was felt through the forests and as far as 2200 square miles away. The eruption caused serious destruction. Today the area has recovered and the surviving underground animals are credited with helping that process along.

As scientists continue to monitor the small earthquakes and rising magma levels, they note that the volcano will erupt again. “It may stay perched at ready stage for a long time before it starts to erupt. The reassuring thing is: when it’s really ready to erupt, it gives lots and lots of signs.”

While this is not the same type of eruption that Mount St. Helens produces; learn about volcanoes and chemistry with this experiment.

What you will need:

Place baking soda in the bottom of your soda bottle and place it in the center of the baking pan. Mold the playdough around the bottle to form your volcano mountain (optional) Pour the vinegar into the soda bottle and stand back as the pressure build and it fizzes to the top and over the sides. Be sure to have towels on hand to clean any spills.